What License Plate Did The General Lee Have?

So today is a big day for the team here at Dukes Online. We are proud to announce the release of our brand new website! Dukes Online has been around for over 18 years now and we could not have done it without the support of our readers who have show such great support overRead more

The Dukes of Hazzard Returns to CMT in HD

THE DUKES OF HAZZARD returns to CMT in HD, kicking off with an eight-hour marathon of one of the nation’s most-loved series on Sunday, January 5 beginning at 2/1c.  The new high-definition episodes will air for the first time on cable, 35 years after the launch of the series in January 1979.  The DUKES OFRead more

If you live in the South, you will not want to miss the 2nd Annual Dukes of Hazzard Family Reunion & Car Show will be held on Saturday, August 17, 2013 @ Henderson Auctions in Livingston Louisiana. Guest stars include James Best (Rosco P. Coltrane)…Read more

Dukes Online is proud to announce that we have launched our official Instagram account! Please take a minute to check out the great Dukes of Hazzard related shots and please don’t forget to follow us! You can find us with the handle @dukesonline.

An iPhone Case for the Dukes of Hazzard Fan

So your a big Dukes of Hazzard fan right, (who isnt) and you have an iPhone 5 and you need the perfect iPhone 5 case for your phone. Look no further than the HEX Axis iPhone Wallet and Solo iPhone Wallet both in orange! I came across these cases …Read more

All the jumps from The Dukes of Hazzard

A collection of every jump from The Dukes of Hazzard from the General Lee, the 1969 Dodge Charger star of the show.Read more

Where: Syracuse, New York
When: July 20-22, 2012
If you are a Dukes of Hazzard fan in New Your, you will not want to miss the 2012 Syracuse Nationals Car Show in Syracuse New York! This year Dukes of Hazzard actors John Schnedier (Bo Duke), Cather…Read more

What was your most favorite Dukes of Hazzard toy as a kid? Most likely, the Dukes of Hazzard General Lee Big Wheel “Power Cycle” could have been your favorite as it was one of the most popular items we all wanted as a kid! There was nothing better than cruising down your driveway, hitting a jump you made out of your Dad’s toolbox and a peice of wood, and then after a clean landing, pulling the brake lever to do a power slide just like Bo and Luke Duke.

Did you have a General Lee Big Wheel? If so we would love to hear you story! Well hope you all enjoy the photos and commercial for the Dukes of Hazzard Big Wheel. 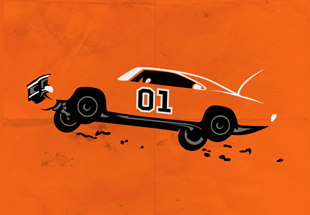 The “Republic New Orleans” is throwing a Dukes of Hazzard Throwback event tonight as a part of their “Summer Kick-Off” Check out their promotional page which offers an awesome piece of General Lee art including a wallpaper for your computer!

Dukes of Hazzard Cast and Crew Belt Buckle on Ebay

If you are a Dukes of Hazzard memorabilia collector then you will want to check out the following auction on eBay. It is for a 1984 Dukes of Hazzard Cast & Crew belt buckle. These belt buckles are extremely rare and hard to find due to the limited amount of them that were made and still exist. These buckes were given to cast and crew members who worked and appeared on the show.

This buckle has a great story behind it because it was personally owned by actor Mike Genovese who played “Nervous Norman Willis” in the Feb 24, 1984 Dukes of Hazard episode titled “Close Call For Daisy“.

Nervous Norman Willis, a neurotic crime boss comes to Hazzard County and loses his little black book, accidentally picked up by Daisy Duke, containing all his crooked deals. so Norman is after Daisy – who decides to hide out at Enos’ place.

So with only a few hours left on the auction, don’t miss out on this opportunity to own a rare peice of Dukes of Hazzard history!